Sougia may only be a tiny hamlet, but it is a welcome stopover for those hiking the Cretan section of the E4 European Long Distance Path. The hamlet is completely isolated, located between Paleochora and Agia Roumeli, the harbour for those visiting the Samaria Gorge.

Those walking from Paleochora to Chora Sfakion often choose to spend a night or two here, as it is about 14 km, or a 4-hour hike, from Paleochora to Sougia. The hike from Paleochora is an easy route which poses no difficulties to most walkers. Those attempting the onward journey from Sougia to Agia Roumeli should be prepared for one of Crete’s most tiring and difficult routes. A few hard-core fans walk this stunning trail three or four times a year. Visit the E4 Path at Crete website for more details on planning your trip.

Sougia offers several taverns and cafés along the shoreline promenade, which is only 200 m long. It begins next to the bed of a dried-out brook and ends next to the fishing harbour. The beach itself extends for just over 1 kilometre along the southern coast, making it the longest in south-western Crete. It is mostly pebble, offering areas of coarse sand which are more comfortable to lie on. Sougia is not particularly known as a bathing resort, although there are a few parasols and deck chairs available for rental. You can spend a night or two in one of the small guesthouses.

Although you can't see them from the shore, there are many other villages nestled against the slopes of the hill country behind Sougia, all the way up to the village of Agia Irini. These villages once enjoyed comparable prosperity right into the post-war period, thanks to their valuable exports, consisting mostly of olive oil and charcoal. Sougia was the harbour that these exports were shipped from, as there was no road linking the villages to the island’s north coast at the time. Merchants from the port city of Piraeus sailed to Sougia with their “kaikia”, traditional Greek sailing vessels, not only to purchase the farmers’ produce, but also to sell their textiles, technical devices and other wares. Whenever the merchants came, the quiet hamlet transformed into a bustling marketplace. On days like these, the kafenion were full, and donkeys and mules were tied up everywhere. Whilst the village filled with sellers’ cries, dancing and songs, its residents filled themselves…with raki!

These days a road leads down thought the White Mountains to the southern coast. Upon its completion, the harbour at Sougia became obsolete. The few inhabitants that remained now earn their money through tourism, both local and international, and most of them return to their city apartments in Chania for the winter. 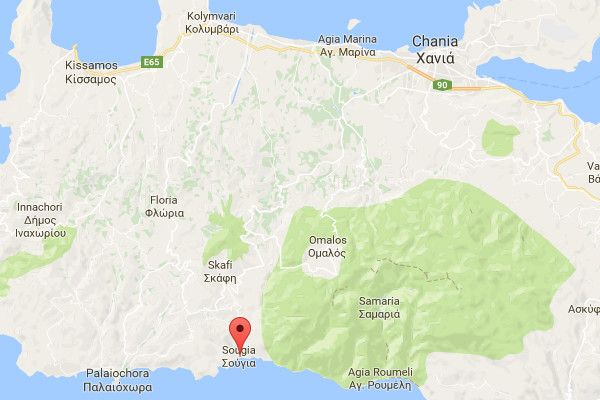 The road from Agia Irini down to Sougia winds its way through 27 kilometres of twists and turns along the mountain slopes. Hikers, however, can take a much shorter route - through the Agia Irini Gorge. The gorge has a truly striking beauty of its own, and is not dissimilar to its more famous cousin, the Samaria Gorge. Unlike the Samaria Gorge, however, it has hardly any visitors.

The Agia Irini Gorge also boasts rock walls stretching up more than 100 m high, and broad swathes of the ravine are forested. There are lovely taverns at the end of the gorge. From there, a dirt track leads you to the main road. The undaunted have about another 4 km to Sougia, but the barman at the taverna is happy to order a taxi for you, which can conveniently take you back to Agia Irini where your car is probably waiting. 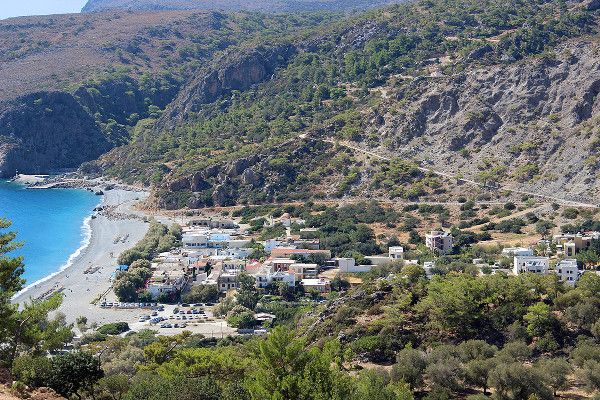