Most visitors to Agia Roumeli arrive with a deep sense of gratitude and an air of light exhaustion. That is because most of them will have arrived in the small seaside village after a 16 km hike down from 1,230 m above sea level through the breathtaking Samaria Gorge.

Agia Roumeli is the village at the end of the Samaria National Park, and home to the ferry terminal that transports day-hikers back to the tour buses waiting in Chora Sfakion to take them home. But visitors who come with time on their hands for this peaceful community will find that Agia Roumeli is so much more than just the end of the road.

Agia Roumeli is not just the end of the road – it sits slap bang in the middle of it, straddling what is without doubt the most stunning coastal hiking route in all of Crete. To the west, the E4 European trail between Sougia and Agia Roumeli is the most mountainous and challenging section of the route, but rewards hikers with stunning views from atop coastal cliffs, and with the utterly secluded beach of Domata, a steep and dizzying four-hour hike from the village. To the east, more leisurely walkers can enjoy the easy, well-defined trail towards Loutro, with the ancient Byzantine chapel of Agios Pavlos at the spot where St. Paul is said to have landed on Crete, and the small but beautiful beach of Marmara, offering stunning sea caves with sparkling, translucent water.

The western route is only to be attempted by experienced hikers, with proper equipment, plenty of water, and a buddy. The eastern route is an enjoyable day hike that can be attempted by most. The full walk from Agia Roumeli to Loutro takes around 7 hours, but the ferry stops at both villages, either returning visitors to Agia Roumeli, or taking them on to Chora Sfakion, where you are reconnected to the road network.

The village of Agia Roumeli is very small. Two main parallel streets connect the taverns on the waterfront with the small souvenir shops and restaurants tucked in behind. Further back is living evidence of the fresh, organic, free-range produce that they prepare. Herds of goats and flocks of sheep and chickens roam freely beneath fruit-bearing trees and next to fenced-off crops. An image of the rural idyll that continues in the background behind the busy tourist port.

Even if you are not attempting the hike through the Samaria Gorge, a walk to its exit is well worth it. It takes you approximately 3 km along a paved road wide enough for the buses that go to collect the weary walkers, and is therefore suitable for families with small children. In the spring, the valley is flushed pink with oleander bushes and a sparkling clear brook gushes under a series of bridges that criss-cross its path.

The road winds its way between the old stone walls of the former village of Agia Roumeli, which appears much larger than the small seaside hamlet of today. It was largely abandoned in the 1950s, when flood waters ruined many of the houses. Today, it is mostly inhabited by goat herds, fenced in between the ruined houses, a testament to times gone by. 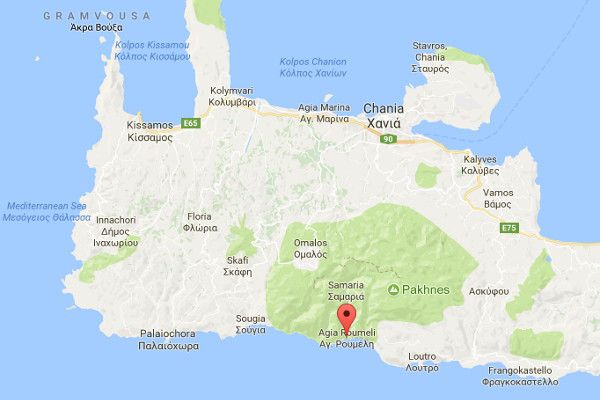 Agia Roumeli is best known as the traditional exit of the Samaria Gorge. The Samaria National Park is the most popular hiking destination on the island and home to the longest and most famous gorge in Europe. It is open to hikers from May to October. The trail starts at an altitude of 1,230 m above sea level, high in the White Mountains by the settlement of Omalos, and leads down over 16 km to the shore by the Libyan Sea.

Given its length and the initial precipitous drop (600 m descent in 2 km), it is conventionally walked in one direction, from Omalos down to Agia Roumeli. Moreover, as there is no road network connecting the two villages, hikers find it most convenient to book a tour with external operators, who will pick you up from your accommodation, and ensure your return journey.

The gorge is spectacular – but it is not tame. The initial descent involves a precipitous downhill hike through pine forests. Good footwear and walking sticks to protect your knees are a must. Fortunately, the €5 entrance fee has been invested in maintaining the trail and installing toilet facilities with fresh spring drinking water at regular intervals, meaning you only need to carry one bottle with you that you can refill.

For those who wish to enjoy the beauty of the Samaria Gorge without the physical challenge, Agia Roumeli offers an easily accessible doorway. Visitors from Georgioupolis can drive down to take the morning ferry from Chora Sfakion or Sougia, and walk the easy, flat 3 km from Agia Roumeli village to the “exit” of the gorge along the paved road. Entry is also permitted from this side, and in less than 4 km you can witness the gorge at its most beautiful: its Jurassic rock-face rippling like water in a pool; the narrow, towering sides rearing up over 100 m high and just 3 m wide at its narrowest point, known as “Portes”; the fathomless tenacity of flowering trees and shrubs clinging to its bare rock walls, and the series of picturesque bridges criss-crossing its river bed.

The gorge is best visited in spring and early summer, from its opening in May to the beginning of June, when the plants are in bloom, water still runs in the brook, and the midday sun has not climbed to its summer temperatures. 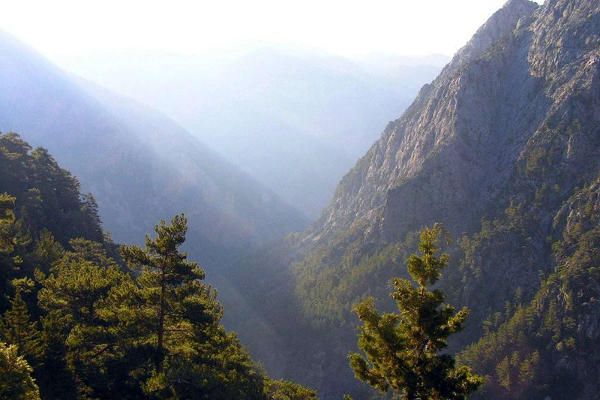 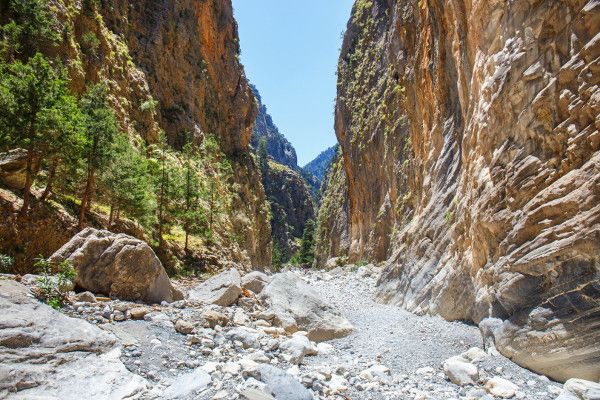