The peninsula between the bays of Chania and Kissamos can still not be accessed by sealed roads. Here, a 4x4 off-road vehicle is the transport of choice, as the dirt roads are sometimes extremely rough. The drive through a landscape devoid of people, but full of sheep and goats, is in itself a great experience. You can visit an abandoned village, indications of an ancient temple, and two pilgrimage churches in complete isolation.

Take your swimming gear, as there is a beach, and a picnic for a shaded stopover on a church square of real sacred significance. 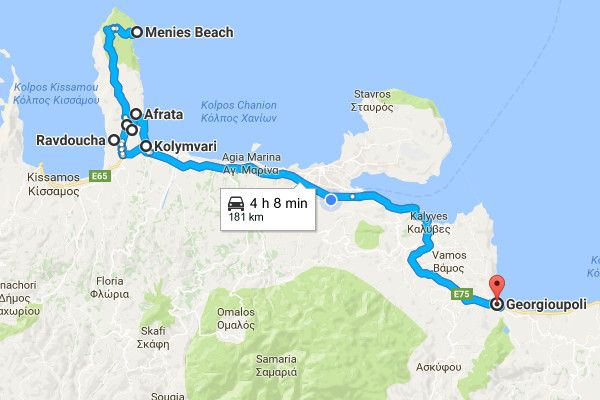 Open the tour in Google Maps

It's 62 km from Georgioupolis to Kolimbari, where our small adventure begins. Here you can still buy something for a picnic, and then experience some spiritual enrichment on the outskirts of town in the venerable old Gonia Monastery.

Go past the modern edifice of the Orthodox Academy, then continue along the sealed road. You will pass the access road to a 'Memorial for the Greek cadets fallen in the Battle of Crete, 1941' set 900 m off the road. 4.2 km further on you will reach a road junction.

Here the road continues downhill through a small gorge to the short, stony gravel beach of Afrata with a snack bar and about 30 sun loungers. The rustic Kafenío 'I Kali Kardia' (the good heart) is situated right on the junction, one of the last hospitable oases before the wilderness.

After Astratigos, take the first fork in the road up to the right, and continue uphill to the village of Rodopou. The tarred road ends just after the village. Now your way continues on the broad dirt road. It's mostly used by sheep and goats.

The track ends after 16.4 km in an abandoned coastal settlement with Menies Beach, a gravel and pebble beach, 100 m long and 20 m wide. The Greek flag flies beside a small white chapel.

During the Second World War, German soldiers were stationed here, guarding this side of the Bay of Chania. You can still make out the remains of machine gun posts and anti-aircraft guns.

Right next to the track, on the outskirts of the settlement, a brown sign labelled 'Sanctuary of Diktynna' draws attention to the fact, that in Hellenistic and Roman antiquity, a temple to the goddess Vritomartis stood here, the Cretan version of the deity otherwise known as Artemis, who was patron of marriage and pregnant women in particular. In antiquity, unlike today, a paved road even lead here. In order to find the few remains, you have to walk up the southern slope from the information sign for several minutes.

From here, drive back the same way that you came. After 12.5 km, however, turn off to the right, and follow the signs to Ágios Ioannis and Agios Pavlos. After just 700 m, you are sure to hit the brakes at the sight of this breathtaking view: across the broad bay of Kissamos, you will overlook the Gramvousa Peninsula and the fortified island of Gramvousa at its tip. On a clear day, you can even make out the distant Peloponnese from here.

The dirt road is now mediocre, and descends fairly straight along the slope down into a long, green valley, which used to be well exploited as farmland. Today, it simply serves as grazing for sheep and goats. 3.5 km after the start of this dirt track, you will see the pilgrimage site of Agios Ioannis Gionas to your right.

Three bells hang in a plane tree next to the small church. Long stone tables and benches for a good 1,000 pilgrims or more stand beneath shady trees below the little church. There is accommodation for pilgrims and a toilet block somewhat to one side - all of this for just 2 days a year. On the 28th August, people flock to this place. Most come in pick-ups; others undertake the long journey on foot to fulfil an oath. For the whole evening, they celebrate with plenty of Cretan music. The Holy Eucharist is then celebrated from 2-5 o'clock in the morning. In the course of the day, everyone returns home.

A very poor dirt road leads another 4 km from the church of Saint John Gionas to the little church of Agios Pavlos almost right by the sea. It is always open, and inside are old frescos in a bad state of repair. Instead of an elaborate iconostasis, the icons hang on a simple wooden board. A path leads down to the stony beach.

It's now about another 8 km back to Rodopou. Then you will be back on the sealed road.

If you're still curious to discover a truly unusual place to bathe and good tavernas, then drive via Ravdoucha down to the 'Waves on the Rock', as the beach is known. Between the rocks and beach, the sea here has made a small, natural paddling pool. In the secluded beach taverna, the best dishes to order are small fish, sea urchins or lamb chops. You can even purchase these here by the kilo - for the whole 'Parea' (you and your fellow adventurers).