Tourism takes a backseat in the most western town on Crete. Its inhabitants, easily numbering only 4,000, make their livelihood from the many farmers in the surrounding area, who buy and sell here. Nothing is really spruced up, except the short shoreline promenade; plenty is rustic and typical of the Cretan countryside. You will experience this particularly on a workday morning. Otherwise, life here is quiet and sedate.

The best place to start exploring the town is at the Archaeological Museum. You can purchase a good, large-scale town map for 50 cents in the travel agent's, Strata Tours, situated diagonally opposite. Map in hand, you can follow in the footsteps of the sparse ancient remains in Kissamos and get a good feel for the atmosphere in town at the same time. 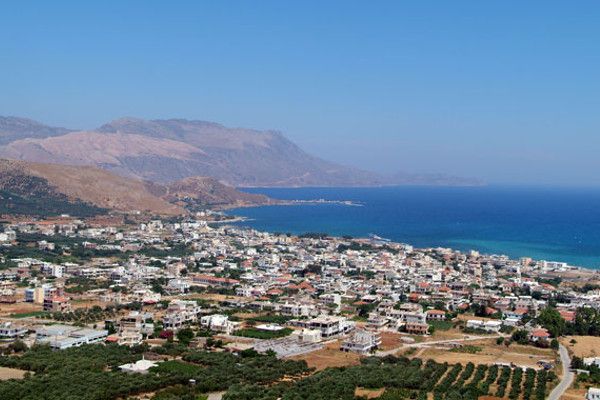 Turn left on leaving the travel agent's and then left again into the one-way street, Odos Polemiston 1941. Walking past a fountain dating back to Venetian times, you will come to the 'West Cemetery', where archaeologists have unearthed a cemetery dating back to Roman times. A viewing gallery overlooks a huge chamber tomb. The ancient steps down into the burial chamber are still clearly recognisable, as is the entrance to the tomb, which was once sealed. The foundations of where a vault was once affixed show how it used to be covered.

Now continue on past the town hall, and you will come to Eirinaiou Square, and then to the large school complex for the whole region, situated on the old National Road. Opposite the school, a sign draws your attention to the 'Early Christian Cemetery.' Like all the excavations in the city, there is no public access here, but you can at least see the paving of the city's ancient main street from the road.

Continue back westward along the National Road. If you turn left onto Odos Lafonisou street before the first supermarket, you will find the 'East Roman Bath' 60 m further on to your left. Across the fence, you can clearly make out the brickwork of a large, Roman thermal bath complex. The remains of columns lie around the overgrown grounds. Two large clay Pithoi (storage vessels) are standing upright, empty.

Once you've passed by this archaeological site, veer right onto Odos Makedonomachon street and then follow the third street on your right back to the town centre. On the way, you'll pass by the town's most significant archaeological site, the 'Urban Villa/House of Phidias.' Right in front of the back wall of the state emergency clinic, you can make out the foundation walls of what was once a large, Roman villa measuring 2,500 m2. It was destroyed by an earthquake in 365 A.D.

Via the main square in Kissamos, Platia Eleftheriou Venizelou, return to your car and follow the road downhill to the short shoreside promenade with several cafés and tavernas. If you want to bathe in Kissamos, head westward alongside the shore, cross a bridge spanning a riverbed and you will arrive at Mavros Molos Beach, the city's only good beach. 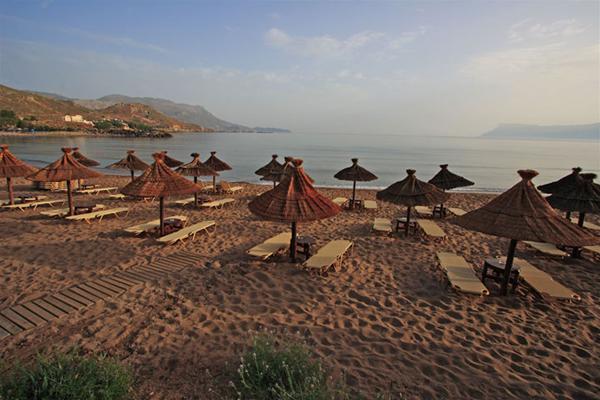 Museums of Crete
The Archaeological Museum of Kissamos

Open the Archaeological Museum of Kissamos in Google Maps

In Classical and Roman antiquity, the outermost western part of Crete was of special significance, because unlike in Minoan times, western Greece and Italy had now become important trade partners with Crete. Some of the interesting archaeological items that have been found here have been on display in the district Archaeological Museum of Kissamos since 2006. The museum is housed in a state administrative building dating back to Venetian/Ottoman times

On the ground floor, two objects deserve closer attention. The first is a model of a simple temple from the 5th/4th century B.C. which was found in Falassarna on the west coast. We can be sure that miniature temples like this were not made as architectural models; instead, they may have fulfilled the same function as Christian shrines do today, and were a kind of a small, private, home temple.

The second item is a grave stele discovered in Polirrinia and dating back to Hellenistic/Roman times. It's been dated to between 150 and 50 B.C. According to the engraving, it depicts a father and daughter. They are bidding each other farewell. The daughter is seated and the father is standing. Both of their remains, incidentally, were found in the same grave.

On the upper floor, two colourful floor mosaics from around 200 A.D., i.e. Roman times, draw attention to themselves. The small one depicts a personification of the four seasons in each of the four corner panels. Winter is certainly the easiest to recognise. At the centre of the image, three women with vine wreaths are dancing around an altar. They are the Horae, daughters of Zeus, who are responsible for the regular cycles of nature.

The large mosaic is 9.7x8m in size, and like the small one it was unearthed in Kissamos itself. Also like the smaller one, it is dedicated to themes surrounding Dionysius and the fertility of nature. Look closely, and you will see many small, often comical scenes depicting the wine harvest and hunting, drinking, carefree spirits and joie de vivre. Can you identify the different animals?

Finally, a sculpture in the back, left-hand corner of the room with the mosaics also tells of people in Roman times and their lust for life. Here you will see Aphrodite, who the Romans later called Venus, and next to here is a boy from among her followers, an Erant. He plays to his lady on a kithara, a kind of guitar from classical times.