Enjoy the highlights of this harbour town, at Crete’s narrowest point, on your way from Heraklion to Ierapetra.

Only 17 km separate the small town of Pachia Ammos on the north coast from Ierapetra in the south, marking the narrowest point of the island of Crete. Those passing through on their way from Heraklion to Ierapetra, Crete’s southernmost city, can break up the journey and enjoy a few of the area’s highlights.

Pachia Ammos was once a key harbour, the gateway to the inland route for goods travelling via Crete from Europe to North Africa, avoiding the treacherous seas on the east coast. The name Pachia Ammos refers to the dense sands of its pebbly beach, which is the main attraction for visitors today.

The small town and its satellite villages are home to just short of 800 people, and were the setting for the 1999 Swedish family movie, Tsatsiki, Mom and the Policeman, in which a young Swedish boy travels to Greece to find his long-lost father.

Idyllically perched on the coast just above the fishing harbour, the cross-in-square church of Agia Fotini makes a beautiful motif against the backdrop of Mirabello Bay. Those interested in iconography should step inside to view the colourful icon of Saint Photini. This depicts the Samaritan women at the well, holding a pitcher with which to draw living water in one hand, whilst raising the other in blessing. Simply known as the “Samaritan Woman” or “The Woman at the Well” in the Gospel of John, she is considered an apostolic saint in the Greek Orthodox tradition. 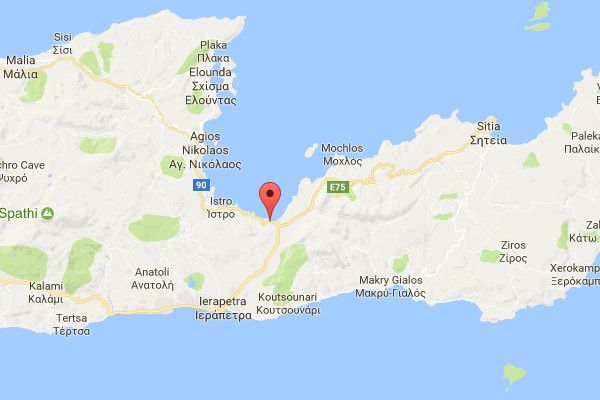 A number of archaeological excavations have been carried out in the region around Pachia Ammos, unearthing an ancient Minoan graveyard and a city from Antiquity.

In the village of Vasiliki on the road towards Ierapetra you can view large Early Minoan clay vessels known for their “Vasiliki style” surface, which has been extremely well preserved. The first of these vessels were literally expunged from the mountains, when a violent storm in 1913 caused waters to carve out a 20 m wide trench close to Pachia Ammos. The vessels belonged to an excavated graveyard, and were used to entomb the bodies of the deceased.

Right by the western entrance of Pachia Ammos lie the excavated ruins of the ancient city of Gournia, with cisterns, an aqueduct and a former Greek/Roman tradesman’s cellar.

The Gorge of Cha

The Gorge of Cha offers wild and barren landscapes for adventure sports enthusiasts. After Pachia Ammos, continue in the direction of Ierapetra. After a few kilometres, you will reach the village of Kalo Horio. Turn left here towards the Thrypti plateau. After 10 kilometres, before arriving in the village of Thrypti, take another left at the little church of Agia Anna.

The gorge is most accessible from the small path that starts from here. Traversing the gorge itself is only for experienced practitioners of canyoning: it takes four hours and requires expert knowledge and professional equipment. The gorge is secured with bolts and relays enabling the adventurous to rappel down its 27 waterfalls.

Those with the experience and daring to take on this “King of Cretan Gorges” will be rewarded with spectacular views of an untouched landscape, not to mention the adrenaline thrill of traversing 27 crystal-clear waterfalls.