The long, car-free shoreline promenade and the small historic centre, where even Emperor Napoleon is said to have spent the night, are truly charming.

The only city on the southern coast of Crete is surrounded by two seas: the Libyan Sea and a sea of greenhouses. These have brought prosperity to the region's farmers since the 1960s. Their pick-ups dominate the streets in the town centre, which has grown haphazardly over time. The long, car-free shoreline promenade and the small historic centre, where even Emperor Napoleon is said to have spent the night, are truly charming.

The shoreline promenade in this town, with 12,350 inhabitants, stretches from the hotel block of Petra Mare right up to the new harbour pier, where excursion boats leave several times a day for the uninhabited island of Chrissi, about 1 hour's ride away. 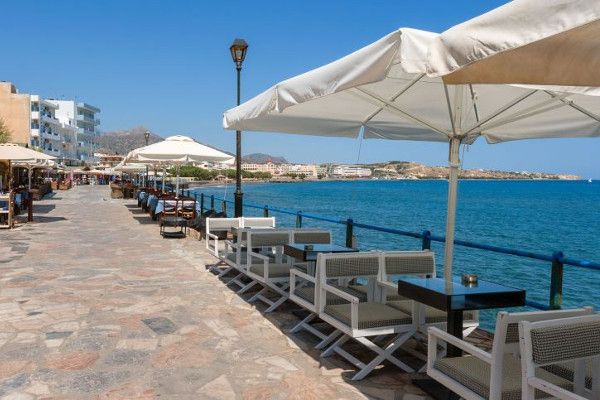 At the end of the shoreline promenade, the so-called "Old Town" begins to the right. A small sign draws your attention to Napoleon's House, situated 20 m further in towards the city. This is a small, two-storey building with a restored façade. The narrow entranceway is only 1.75 m high. This was enough for the vertically challenged emperor, however, who would have been able to walk straight through in 1798. On his way to a raid on Egypt, his ship weighed anchor at Ierapetra. The Corsican had some of his sailors row him ashore and, according to legend, he met a Cretan notary who offered him the hospitality of his house for the night. When Napoleon secretly left in the early hours of the morning, he left behind a thank you note, in which he revealed himself as the 'Great Frenchman'.

Just a few steps further on, the very small fortress of Kales from the year 1307 rises up to the left, right by the sea. Its battlements offer a lovely view over the rooftops of the historic city centre and out across the sea towards Africa.

After this on the right-hand side, you will then see the double church of Metamorfosis tou Christou along the shore promenade. This dates back to the 14th century and is mostly closed. The church has two apses: as was often the case in Venetian times, one half of the church was for the Roman Catholic service and the other for the Greek Orthodox service.

A Mosque with a Minaret

The most significant monument in the city is the partially restored Ottoman mosque with a minaret and a beautiful fountain for ritual ablutions in its forecourt. It is mostly closed, but completely unadorned on the inside anyway.

Before returning to the parking lot on the harbour pier, you can pay a visit to the Archaeological Museum. Afterwards, it's best to return to the shoreline promenade for a coffee break.

Museums of Crete
The Archaeological Museum of Ierapetra

Open the Archaeological Museum of Ierapetra in Google Maps

This small museum is housed in a school built especially for the city's Muslim children in 1899. It displays only a few, but very interesting finds from the region. The explanative panels are written in English and are relatively comprehensive and informative.

As soon as you walk inside, you will gaze along the long, narrow hallway between the two rooms at a virtually fully preserved marble statue of the goddess Persephone from the 2nd century A.D. In her left hand, she is holding an ear of corn alluding to her mother, Demeter. Persephone could only ever spend one half of the year with her. The other half of the year, she had to spend in the Underworld as the consort of Hades, and in this time the earth lay fallow. Her head is crowned with two small snakes and an altar as an indication of her function in the Underworld.

On your way to Persephone, the display cases on the right-hand wall of the first room are particularly worth seeing. In the first display cabinet, you will see two very old, very simple pottery wheels. One side is flat, and the other is convex. It's incredible what beautiful vessels Minoan craftsmen could produce by such simple means!

In the third display case, two stone oil lamps, about 30-40 cm high, are very enlightening. The oil pooled in the relatively large bowls. Wicks lay in the two notches on the edge of the bowl and offered light, especially for rooms of sacred importance.

Two ceramic goddesses are exhibited in the fourth display case, in a typical posture with their arms raised. The explanative panel draws your attention to an interesting way of interpreting this: perhaps the position of their arms doesn't indicate a gesture of blessing or worship, as many assume, but is an allusion to the sacred bull's horns which were part of the every Minoan sanctuary.

Finally, the fifth display cabinet also offers an insight into the techniques of Minoan craftsmen. It displays a casting mould for bronze blades. A small sickle lies in one of the cavities.

Three Minoan sarcophagi are also exhibited in this first room with the display cabinets. Three others stand in the small adjoining room between the two larger halls. The sarcophagus on the right-hand side alone makes this museum worth visiting. It dates back to the Post-palatial period of the Minoan civilisation and shows stick-figure sketches of animals and people in eight panels. Some of the depictions appear to portray hunting scenes. On one panel, you can see three people in a chariot pulled by animals, which is clearly moving on spoke wheels - and that was over 3,300 years ago!