Nobody arrives in Mochlos by chance. This tiny hamlet lies on the north-eastern coast of Crete, beneath the coastal road joining Agios Nikolaos and Sitia. There’s practically nothing to do here – which is precisely why people come: to sit in the few tavernas by the waterside, to bathe at the single sandy beach, and perhaps to ride across to the uninhabited off-shore island, where American archaeologists are excavating a significant Minoan settlement.

Those wishing to pay a visit will have to leave the well-developed National Road at Sfaka or Lastros, and follow a narrow, minor road twisting down through the mountains to the coast. The turn-off for those coming from the west, just before Lastros, passes by the entrance to a large gypsum quarry. The white material is mined here in an opencast quarry, but it is not open to visitors.

This sleepy seaside village is home to just over 100 inhabitants, with a significant number of foreigners who have come and never left! Life in the hamlet is concentrated around the Platia, or main square, by the waterfront. The barely 20 metres of sandy beach is served by a quiet road that rarely sees vehicles and is often used as a second terrace for the tavernas on the waterfront. Those who don’t mind shingles or rocks will find other bathing spots along the promenade towards the fishing harbour in the west.

The seas are calm and sheltered from the wind thanks to the small, off-shore island known as Agios Nikolaos, or simply Mochlos. The island used to be part of the mainland until an earthquake in 1700 B.C. severed its connection. Snorkelers and divers will still recognise the ruins of the old isthmus beneath the waves.

The plain of Mochlos was settled over 5,000 years ago, and the island of Mochlos or Agios Nikolaos is home to the remains of a Minoan settlement, dating back to approximately 3000 B.C.

Archaeologists conjecture that this was an important Minoan sea port. American Archaeologist Richard Seager dug the first sod here in 1908, and successive teams from the University of North Carolina have since unearthed an entire settlement, with houses, workshops, places of worship and theatre areas. Archaeologists continue to excavate down through multiple layers of history, with Early Byzantine remains on the top layer and Prepalatial Minoan remnants at the bottom. The only edifice that remains intact is the small white chapel dedicated to Saint Nikolaos.

Work has continued since the 1990s. The most significant find are Prepalatial Minoan graves in the shape of houses, which were discovered together with unique gold jewellery, seals and stone vases. These can be viewed in the museums of Heraklion, Agios Nikolaos and Sitia. The island remains a work in progress, with little in the way of information for visitors. Those who choose to make the crossing can look inside the Minoan graves; discover the remains of the subsequent Roman colony, including a fish pond, and discern remnants of a Byzantine settlement. What the site lacks in information, it makes up for in rawness and romance.

Warning: Lying 180 m off shore, the island with its ancient ruins looks tantalisingly close, but visitors are strongly warned not to swim there. Rips and strong off-shore currents can be hazardous even in seas that appear calm.

The safest route is to contact one of the local boat owners at the fishing harbour, who are usually available after 1 pm. Mochlos Boat Tours operate regular trips to the island, or visitors can ask after the skipper at one of the tavernas. 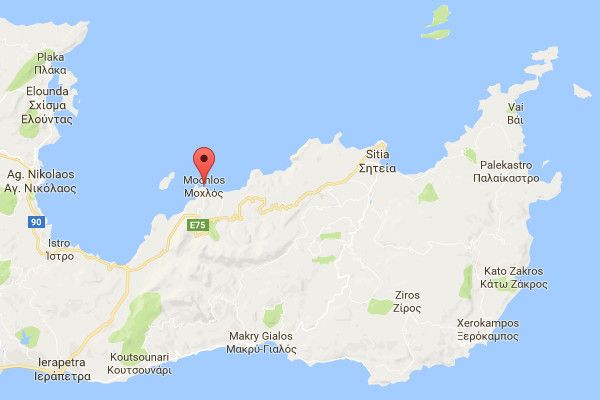