The small square right by the sea in Sitia is a great place to unwind, as is the seaside promenade. A sandy gravel beach begins on the eastern edge of town.

Like its western counterpart, Kissamos, Crete's most eastern town (14,500 inhabitants) is a quiet little rural town with a modest number of tourists. Here too, the backbone of the local economy is comprised of farmers from the wider community who come here to shop. Unlike Kissamos, Sitia makes more of a well-planned impression, rather than uncontrolled growth. This makes the historic centre between the harbour and the small, Venetian/Ottoman castle particularly charming.

There is, admittedly, a lack of great historic sights: following two severe earthquakes and two Turkish raids, the city was practically abandoned from 1651 onwards, and was only resettled in 1870. The small fortress on the upper outskirts of the historic centre has since been beautifully restored. Concerts and theatrical performances are sometimes held here in summer. 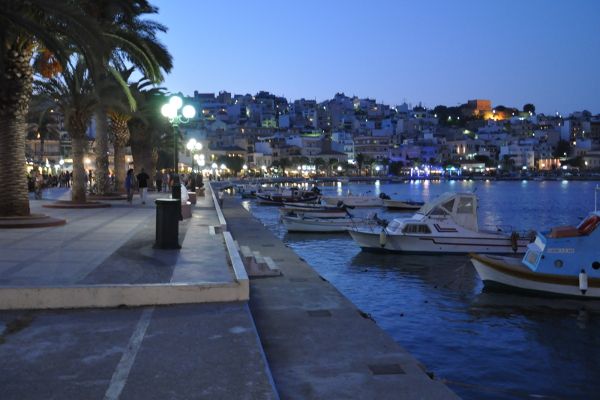 The town's most significant sight, however, is the district Archaeological Museum (closed on Mondays). The objects on display here are clear evidence that the region around modern Sitia was a significant centre of trade on the island from Minoan up until Roman times. The most beautiful find on display comes from Palekastro, near the island's eastern coast: it's a figurine of a youth, only 49 cm high and put together from nine pieces. It was carved from rhino ivory about 3,500 years ago. The youth is wearing gold-leaf sandals and his hair has been finely shaped by hammering serpentine gemstone. Rock crystals were originally set into his eyes.

The small square right by the sea in Sitia is a great place to unwind, as is the seaside promenade. A sandy gravel beach begins on the eastern edge of town.

Sitia is about 250 km by road from Georgioupolis. Too far?

Then why not drive your rental car to Heraklion airport. From there, a turboprop engine run by Sky Express departs for Sitia in the morning several times a week and returns in the late afternoon. Pay about 64 euros per person for a return ticket and experience the entire coastline between Iraklio and Sitia from a low altitude - a bird's eye view!