An excursion to the Minoan Palace of Festos, Crete

The Minoans were clever folks. Above the extensive Messara Plain, which was then and still is the breadbasket of Crete, they constructed their ruler's main sanctum and palace on a hill surveying everything.

Italian archaeologists uncovered the complex in Festos (alternately written as Phaistos or Faistos). It is much smaller than the complex at Knossos. You will hardly need more than 45 minutes for a visit. But even if you don't intend to pay a visit, you should still walk the 100 m up the paved footpath from the car park to the current entrance.

Enjoy a magnificent view of the plateau from the footpath and the cafeteria above the little entry booth. To the north, it is delimited by the Psiloritis massif, almost 2,500 m high; to the south, by the wild Asterousia Mountains, over 1,000 m high and sloping right down to the coast. Moreover, you will also get much more than a superficial impression of the entire palace complex through the fence. To the right further down, you can make out the West Court bordered by a considerable number of remains from the time of the Old Palace. The so-called 'royal quarters' from the time of the New Palace are hidden beneath modern protective covers. 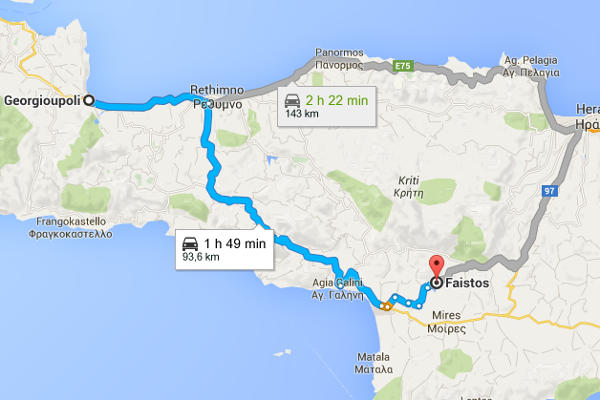 Open the Palace of Festos in Google Maps

According to legend, Rhadamanthys, a brother of Minos, was the first ruler of Festos. The first traces of a settlement here date back as early as the 4th millennium B.C.

The first palatial city emerged around 1,900 B.C. After its destruction, a new palace was built, as was the case in Knossos. People lived in Festos right up to the 2nd century, before the settlement was finally destroyed by warriors from the ambitious neighbouring city state of Gortys.

Once you've bought your ticket, it's best to first head down to the West Court. A broad flight of terraced steps on the north side served as a spectators' gallery for participants at ritual celebrations. Circular shafts may have served as depositories for sacrifices and offerings. On the east side, you can clearly distinguish between the masonry from the Old Palace and the New Palace: the ashlar masonry is older. The portions of façade from the well-carved stone blocks belong to the more recent era.

Before you now climb the monumental staircase to the Central Court, take a glance down the corridor connected to the south of the stairs. Several large Minoan storage containers, known as 'pithoi', are still sitting there.

The Central Court itself is not so interesting. From the north-east corner, walk about 15 m to the preserved wall fragments of a Minoan molten metal furnace. These are about knee high and are now surrounded by bars. Archaeologists still found the remains of slag inside. From the middle of the north side of the Central Court, you can then continue to the 'royal quarters', protected from the wind and weather by a modern roof. The entrance way from the Central Court emphasised the special significance of the rooms that lay beyond with two wooden half-columns set on stone bases, which are still preserved today, and two wall niches decorated with frescos, where sentries perhaps once stood. The remains of stair treads are a clear indication that there was once an upper floor.

Your visit is now nearly over. You can now drive on to either Matala or Gortys. Both destinations are well worth a visit.