Excursion to the ancient city of Gortys, Crete

It would be easy to drive past the ruins of the city of Gortys, if it weren't for the brown signs. In fact, the remains of numerous buildings are well hidden in an old olive grove. But the signs ensure that you arrive safely on the parking lot in front of the entry booth. The garden of the tourist pavilion right next to the car park is a great place for a cup of coffee or a cold drink before you embark on your visit.

The first building you come to from the entrance is the Basilica of St. Titus from the 6th century. The apsidal walls still tower up to their full height. It is named after a companion of the Apostle Paul, who preached here as a missionary in 59 A.D. Back then, Gortys was the Roman capital of all Crete. It had three harbours and made a considerable profit from trade with Cyrenaica, modern day Libya, which was also part of the Roman Empire. Before continuing his journey, Paul consecrated Titus as the first Bishop of the island. He remains the Patron Saint of Crete to this day. 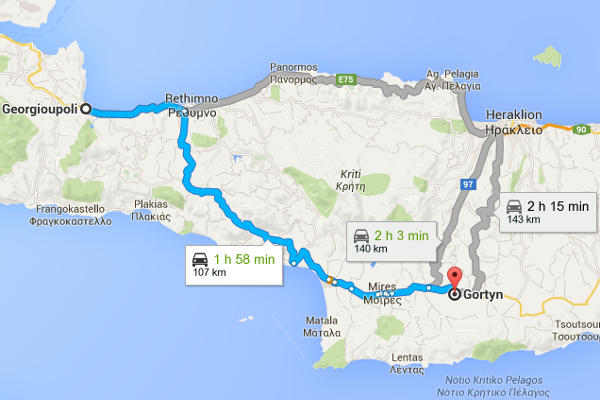 Open the archaeological site of Gortys in Google Maps

The civil and penal legislation decreed here formed the laws of inheritance, family, divorce and criminal law of the city state 2,500 years ago, which makes these blocks of stone one of the world's oldest law codes.

Next, the path takes you to the Roman Odeon. Concerts were held here, and mimes and musicals were performed in this open-air theatre 2,000 years ago. Here, you will now also discover the most significant archaeological find in Gortys, behind bars to protect it from vandals: stone panels with laws carved into them in Greek writing, dating back to around 500 B.C. We still have twelve of what were once 20 such panels, comprising a total of 42 stone blocks. The written laws amount to about 17,000 letters. The writing is written alternately from left to right, and then the other way round from right to left. The civil and penal legislation decreed here formed the laws of inheritance, family, divorce and criminal law of the city state 2,500 years ago, which makes these blocks of stone one of the world's oldest law codes.

Many guided tours end their visit to Gortys at the Odeon, but you can walk a little bit further. From behind the Odeon, you will arrive at a small terrace, similar to a park. Here you will find an ancient plane tree protected by a fence. Zeus and Europa are said to have conceived a son beneath this tree: the legendary Minos.

Returning to the entry booth, your visit to Gortys is still far from over. You can now wander through the olive grove on the other side of the main road for about another 60-75 minutes on the trail of numerous, charmingly enchanted ruins from Roman times (albeit only across a fence).

First, take the asphalt road beginning opposite the entrance to the car park towards the village of Mitropoli. Straight to your left, an olive tree has had a playful notion: it has enveloped an ancient column between its two trunks. About 150 m further on, there is the beginning of a fenced-off area to your right. You will see a circular building with eight apsidal niches and columns standing on pillar-shaped bases: this is probably a baptistery, an early Christian baptismal font for adult baptism.

This is accompanied by the foundation walls of a five-aisled early Christian basilica further south within the fenced-off area. The basilica is cut in two by the road to Mitropoli. Many columns are lying around; green nets covered with gravel protect simple floor mosaics.

Here, you should turn around and go back towards the car park. Should you want to explore some more, follow the path through the fields, which leads you to the right into an olive grove. You will come across the striking remains of a theatre, a Roman Temple of Apollo, a Nymphaeum, Roman baths in the Praetorium (the Roman administrative building), and the Temple of the Egyptian Gods. But if the sun is beating down, that's just a good tip for the very keen. Always be sure to take enough water with you!