The main destination of this trip are two archaeological sites far from the beaten track in westernmost Crete. You will drive through landscapes that are visited only rarely, you can purchase unique souvenirs direct from artisans, visit the little town of Kissamos and, naturally, bathe at a top beach as well.

You can swiftly reach Kissamos from Georgioupolis on the well-made highway, which even approximates a real motorway after Chania. 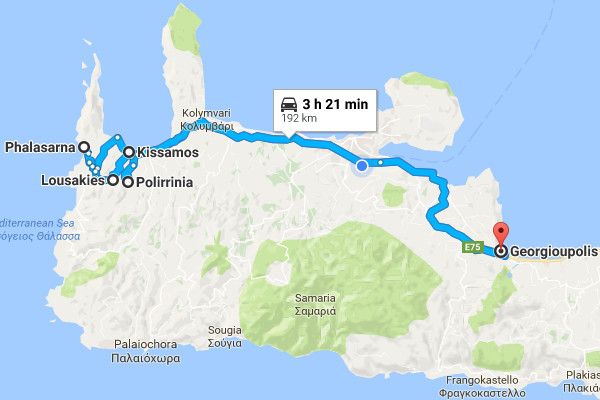 Open the tour in Google Maps

The Sandy Beach of Falassarna

Afterwards, follow the main road along the west coast to the mountain village of Platanos, where the street down to the coastal plain of Falassarna starts.

The plain often glitters in the blazing sunlight much like the wide expanse of the sea: hundreds of greenhouses reflect the sun’s rays. The only part without them is in the far north.

That is where you are headed, because there you can bathe at the super-wide, endlessly long sandy beach, look for a quiet valley in the dunes, and relax in some of the few tavernas.

An extensive archaeological site then awaits you in the far north of this coastal plain. It's fenced off, but entry is free and there's no one on duty (the official opening hours are Tue-Fri, 8:30am - 3pm). Here you can learn about an ancient war harbour amid the most beautiful landscape. Small, colourful paintings prompt your imagination, and show how various parts of the settlement once looked.

Ancient Falassarna enjoyed its heyday in the Hellenistic period between about 350 and 67 B.C., meaning it had about 300 prosperous years. In the beginning, it was a significant harbour for the war ships of the Hellenistic rulers, later it developed into an infamous pirates' nest. That's why the Romans destroyed the city in 67 B.C., because they wanted to pacify the Mediterranean.

The remains of a settlement have been demonstrated as far back as Minoan times and Classical antiquity. Falassarna was only completely abandoned after a devastating earthquake in 365 A.D. Archaeologists began the first serious excavations here in 1986 - and you can see the result. The fact that the coast here has risen by about 6.60 m since ancient times played into their hands. This means that the ancient port now lies high and dry, and they were even able to excavate its quay walls.

The heart of the settlement was a small lagoon, about 7,500 m2 in area, which was transformed into a harbour. The basin was lined with masonry and connected to the open sea via two canals. Defensive walls with at least three high towers protected the heart of the city. Another, smaller body of water lay behind the harbour basin. This is probably where the ships wharfs stood, on which new ships were built and old ones could be repaired. The whole city was surrounded by a long city wall, sometimes a double wall, 550 m of which remain. On a long rocky hillside in the south, archaeologists have discovered the remains of a temple. It most likely marks the acropolis of Falassarna.

If you're interested in delving deeper into the excavations, you will discover the remains of five small cisterns directly south of the current warden's booth - which is usually unoccupied. Moreover, along the coast, about 80 m south of where the former canal flowed into the sea, you can find a large fish basin carved out of the rock. It is 25 m2 and was used for aquaculture. As was the custom right up until the Middle Ages, ancient graves of all shapes and sizes lie outside the city walls, especially to the east and south of the warden's booth. Directly on the access road to the site entrance, a boulder resembling a mighty throne forms the unusual remains of ancient stone extraction in the immediate vicinity. We do not know what it was used for.

www.phalasarna.org is the homepage of an association of friends for the excavations in Falassarna. The website is in Greek and English. Here you will find a colour brochure which you can print out for free and excavation reports, plus much more. The initiative is quite unique for Greece!

When you're ready, drive back uphill along the coastal route and continue to follow it until the end of the village of Platanos. Then a sign points you towards Lousakies. Follow this road for 4.6 km, until another sign guides you to Galouvas. Once you've passed through the village, the sealed road ends. You will have to cope with a narrow dirt track through the fields for the next 1,500 m, which is rather bumpy in places. Then you will arrive at the village of Polirrinia. Follow the main road to the right, and after 100 m turn to the left up to the acropolis of Polirrinia.

Here you can undertake a short hike up the narrow paths to the ancient site, wander through the current village, and stop by a passionate wood carver, to sample a glass of his deliciously spiced raki and take a look at his original work, which also makes for a great souvenir.

Polirrinia is certainly one of the least known archaeological sites in all of Crete, and yet these remains of the past lie amid an isolated, mountainous landscape of particular beauty, and some are even in the midst of this village, which has stayed close to its roots and far from the beaten track.

According to the statements of several ancient authors, Polirrinia was the most important city in Western Crete. To this day, there have still not been any archaeological excavations on a grand scale here - there is most probably still plenty to discover. Your journey of discovery can start where the small street leading towards the acropolis ends. This is where the 99 Pateron church is situated. It is always closed. 31 square stone blocks with ancient inscriptions have been built into its outer walls. You will easily identify them. The terrace on which the church is built is really the foundation of an ancient temple. You can clearly make out the carefully constructed stone work of the temple terrace, if you stand south-west of the church. Moreover, two traditional, circular threshing floors lie in front of the western façade of this place of worship. The outline of cisterns are just a few steps further on, and you can easily recognise houses carved out of the rock.

In front of the church, a sign-posted footpath through untamed nature takes you up to the hill of the acropolis, which offers a fantastic panoramic view, as well as some remains of the city wall and several cisterns. The small church is a great place for a picnic.

To get to the village, leave your vehicle at the entry road to the acropolis beside the taverna, which is unfortunately only open in high summer, and head along the broad, paved road, which first takes you to the carving workshop O Vrachos. This is signposted. Its owner, Giorgos Tsichlakis, was a cabinet maker for 12 years, but now he carves mostly small souvenirs, mobiles and wind chimes made of olive wood. Every autumn he distils his own raki and pours it liberally for his guests. His speciality is a raki mixed with herbs, which tastes something like a good Bavarian monastic liqueur. It's a short walk from his workshop further into the village, with its many old houses dating back to Venetian times, as well as the remains of a cistern and an aqueduct from the years of the rule of the Roman Emperor Hadrian in the 2nd century A.D.

After this second fleeting visit to antiquity then head back to the coast through a very peaceable landscape and via the National Road onward to Georgioupolis.