Visitors to the Castle of the Franks (the translation of Frangokastello) simply can't shake the feeling that they're somewhere in an African desert or the Middle East. Here, between where the mountains tower over 1,000 m high and the Libyan sea sparkles like a jewel, Frangokastello sits along a great, flat coastal plain, which extends deep into the island's interior. Once summer arrives, by the end of June at the latest, the whole plain transforms into a vast, golden grassland.

Two small villages huddle against the foot of the mountains. Only a tiny, strikingly rectangular fortress is silhouetted against the plain itself. The fortress is practically on the shore, standing above a gently sloping, fine, sandy beach. Several small hotels, guesthouses and tavernas are scattered in the surrounding countryside, so that there's no sense of a village centre, or a real town. Somehow, it feels like reaching the end of the world. Especially when you turn on the car radio, and all you can hear is the Arabic tones of Libyan or Egyptian broadcasters.

The fortress of Frangokastello was built by the Venetians in 1371, and then "modernised" in 1593. It has now been in a state of disrepair since the 17th century. The outer walls with their striking battlements are well preserved; the interior is empty. The fort is steeped in a story of a spectral nature: on certain years, around the 17th May, local residents see the silhouettes of armed riders, black against the fortress walls. They appear as giant shadows just after dawn, moving in procession across the beach from the church of Agios Charalambos to the old fort of Frangokastello, where they fade into oblivion.

Ask any local, and they will explain where these spectres come from: they are the ghosts of 386 Greek rebels, who defended the castle of Frangokastello against the Ottomans and were killed here on the 17th May 1828. The mysterious mounted warriors are known as “Drosoulites” or dew shadows, because they appear with the first morning dew on a moist, calm May morning. There is no photographic evidence of the mirage, but during the Second World War, a German patrol is said to have found the ghostly sight so convincing that they opened fire. Fact or fiction… find out for yourself!

When you arrive in town, it’s best to park right next to the castle. The sandy beach in front of the castle offers no shade, but it is very safe for small children thanks to its gentle descent into the sea. Swimmers who prefer deeper water should head 600 m east to Orthi Ammos, which translates as "standing sand". Here, the beach is crowned by mounds of sand, rather like dunes, heaped up to 20 m high. There is a rare natural phenomenon to discover here: dig only a few centimetres down into the sand. With a bit of luck, you may strike your spade against one of 30 to 70 water veins which flow towards the sea underneath the sand. Their number depends on the season.

The ruins of the abandoned monastery of Agios Charalambos are very close to Orthi Ammos Beach. Towards the east, the remains of a floor mosaic are highly visible, 60 m to the left of the road in front of the castle. They date back to an early Christian basilica, testifying to the very early settlement of the region. The chapel of Agios Nikitas is just behind the mosaic, a more recent edifice standing next to an ancient carob tree, which makes for a picture-perfect holiday snap. 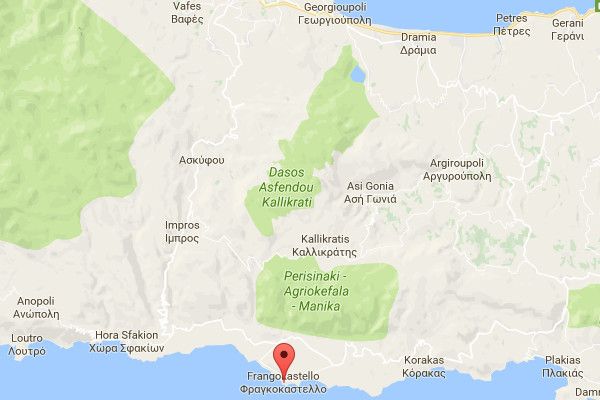 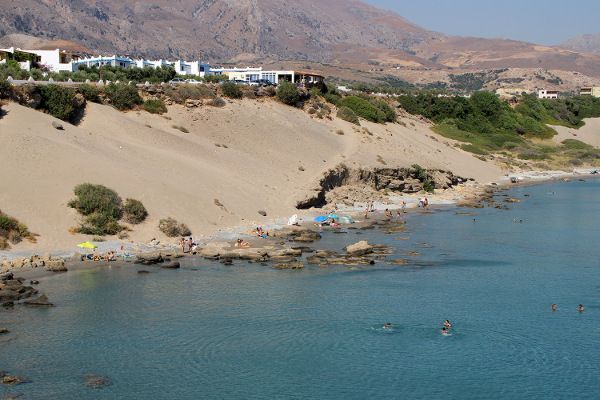